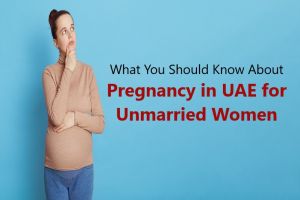 Women who think they’re pregnant while residing in UAE should visit a clinic or hospital for an initial medical consultation with a certified and licensed physician. A doctor can carry out tests in order to confirm pregnancy. Expatriates can opt for a private or government-run hospital or clinic for prenatal care. The main government and private hospitals of the UAE have maternity wards. Government hospitals provide maternity care that’s largely free; however, they have the tendency to be busier. it is, therefore, a lot less convenient in comparison to the private options of pregnant women.

It’s also not allowed for the husbands to come during appointments or be physically present during the delivery in a government maternity ward. In most private facilities, they allow husbands in and provide support for childbirth.

It is very crucial to remember that it’s absolutely illegal for any woman who’s unmarried or single to be pregnant while residing in UAE. The consequences of local authorities discovering that any single woman is carrying a baby can include jail and deportation. There were even cases wherein physical punishment or lashings were inflicted; however, they were only in very rare and extreme circumstances.

That being said, pregnant women who are still single while living in UAE must plan on heading home or fly to another country. As a marriage license is required in having access to any type of maternity care in the country, even getting married in Dubai following conception won’t be enough in resolving the situation. All unmarried women who choose to leave UAE due to being impregnated can also face issues should they try in returning to the country following childbirth.

In November of 2020, UAE government officials introduced important updates on the local legislation, including sex being no longer considered a criminal act and punishable by law in the country. But, generally speaking, the amendments to the UAE Family Code does not really change what it means to be pregnant in UAE out of wedlock. Up to this very day, a baby will only be allowed if it is delivered in the context of marriage.

Can I terminate pregnancy in UAE?

Abortion will only be allowed under specific circumstances in the UAE. It will be conducted by a licensed doctor if it’s necessary in saving a pregnant woman’s life. It will only be performed prior to the pregnancy’s fifth month if the pregnancy will be causing serious harm to the mother carrying the fetus or if the child will be born suffering permanent or severe physical or mental deficiencies. For the latter, the couple will have to give their consent regarding the abortion.

Abortion in UAE will only be performed within a government hospital with the recommendation of several different medical specialists.

You may want to know: Marriage for Muslims and Non-Muslims

What’s the best way to deal with the situation?

You should know: Legal Position of Prenuptial Agreements in UAE

Reasons why a wedding or marriage license acquired during the pregnancy:

If you face the issue of unexpected pregnancy and you’re in need of a rush wedding with the least amount of paperwork and procedures possible, then you’ll need to consult with a marriage attorney in UAE for a Georgia wedding as it is going to be the best solution for you.

A marriage in Georgia is the best for couples with a short timeline and a complicated situation. A complication can also be if contracting parties to a marriage are of different religions or countries. A party may also have been married in the past or is still currently married and a little one is expected.

It’s recommended to consult with a seasoned marriage attorney in UAE so you can be considered married legally when you get back from Georgia. By the end of a Georgian marriage, a couple will have a Georgian wedding certificate and an English translation with a stamp of the Georgia Ministry/Dept of Foreign Affairs.

If you want to know more, call us here in Dubai Court Marriage today!