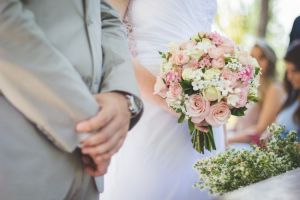 Court marriage in Dubai can be conducted between an Indian and a Pakistani regardless of caste, creed, or religion. The procedure of Dubai court marriage does away with ceremonies and rituals associated with traditional Indian and Pakistani marriages. Parties can apply to the Ministry of Justice in UAE for performance and registration of marriage, as well as a grant a marriage license.

The first step in getting married in Dubai for Pakistani and Indian couples is to check eligibility with the UAE Ministry of Justice’s Marriage Department. Once is considered an eligible candidate for court marriage in Dubai, UAE if the following conditions have been met:

Read also: How to Get CENOMAR in Dubai

Step 2: File the notice for the intended marriage

The second step is to file the notice for the intended marriage. The notice has to include proof that at least one party to the court marriage in Dubai has a valid UAE residency. Details and supporting documents related to marital status, dwelling place, and age must be provided. The notice can be filed at the Justice Ministry’s Marriage Department where a marriage officer will put up or publish the notice for the intended marriage in the office. This is for any third party to be notified regarding the marriage intention and get the chance to object as necessary.

If a marriage officer from the Justice Ministry will uphold an objection, then marriage solemnization will be refused. Either of the applicants can file their appeal to the Ministry, but it is best to be handled by a marriage attorney in Dubai. An appeal has to be filed within the period of time specified by the marriage authorities. If an appeal has been submitted, the decision of the UAE Ministry of Justice will be considered final and binding. A marriage officer will have no other choice but to follow in accordance with the court’s judgment.

Step 3: Be on time during the set schedule for court marriage

The couple that intends to marry needs to be on time during the scheduled date for marriage, including the father of the bride and two male witnesses. The three people apart from the couple will act as the witnesses to the marriage. The three witnesses will also have to sign declarations in front of a marriage officer who’ll be countersigning the declarations. The marriage solemnization doesn’t have to be in the office of the marriage officer. It can be held in the place where the parties desire given the desired place has a reasonable distance from Dubai.

Read also: The Importance of Registering your Marriage in UAE

Is it possible to conduct a Muslim marriage between an Indian and a Pakistani in Dubai?

Yes, a Pakistani and Indian couple can have a Muslim marriage in Dubai. Here are the legal requirements applicable for all Muslim marriages in the emirate:

To know more about court marriage in Dubai for Pakistani and Indian couples, call us here in Dubai Court Marriage today!